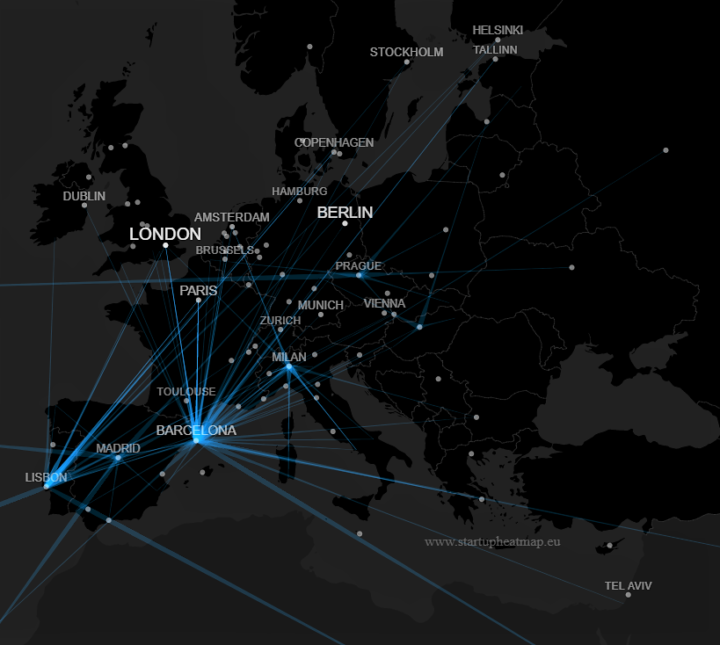 Any type of movement – inbound or outbound – can be good for startup hubs. To name just a few benefits: inbound founders bring talent, creativity, diversity, economic impact, and jobs. Founders who decide to leave their home turf, on the other hand, stay in touch with the place they left, and share knowledge and experience from abroad. Their mobility can help build new connections, opening new channels for the exchange of ideas, capital, and people. We find that mobility is a two-way-street, and every founder “lost” can be a connection gained.

Keeping that in mind, let’s have a closer look at a few outstanding examples for the mobility of founders. Overall, 21% of European founders in our 2017 survey moved across borders to startup their businesses. To better visualize this, we tracked the net inflow and outflow of founders across several European regions:

We found that two regions have a net outflow of founders: The Mediterranean with -3% and Central and Eastern Europe (CEE) with -5%. Other regions have net inflows ranging from +8% (Baltics) to +19% (UK & Ireland). A closer look at select Mediterranean and CEE countries reveals the following trends: 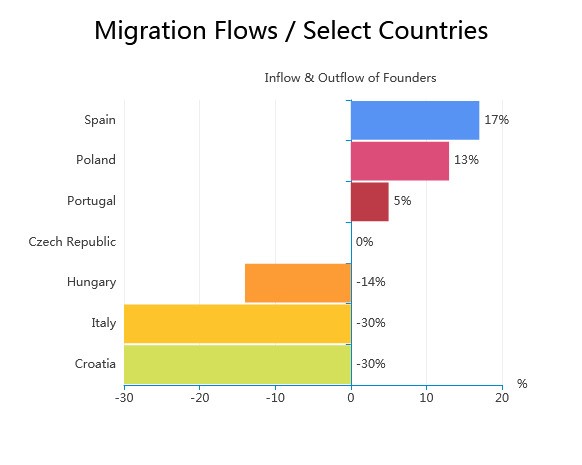 Spain and Portugal with 17% and 5% net inflows of founders perform better than the trend in the Mediterranean region might suggest. Italy on the other hand, with a net outflow of -30%, is largely responsible for the overall negative trend in that region.

The Czech Republic, which has an even balance sheet in its founder migration, and Poland, with +13% net inflow, perform better than the CEE region on average. Meanwhile, Hungary and Croatia are prime examples of “founder-exporting countries”.

Are these results the definitive benchmark for the attractiveness of startup hubs? We don’t think that’s necessarily true. In fact, what our migration data shows mostly refers to the status quo: At some point of their lives, our founders have made their very own decision on whether to move or stay. So, we simply asked them where they are originally from and where they are currently based. This resulted in the current diversity of startup founders in the European regions: 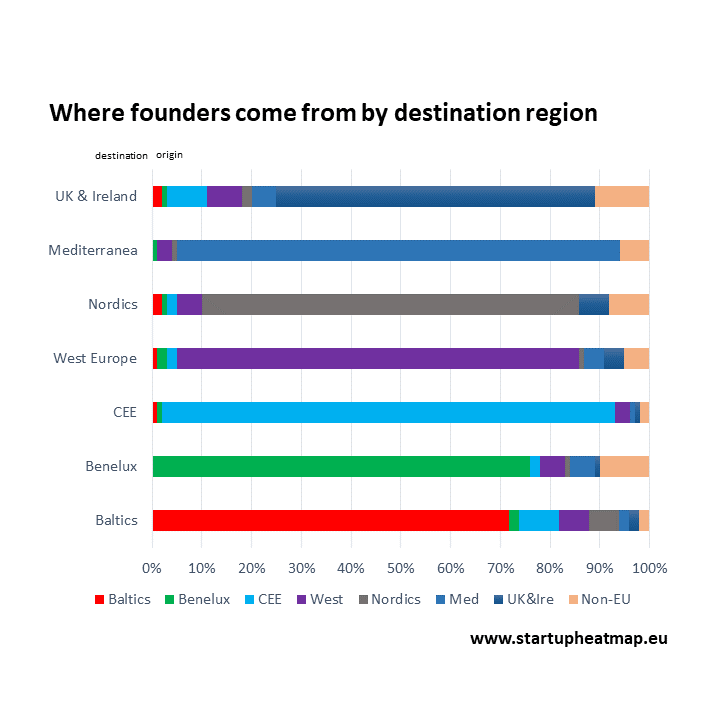 It is therefore interesting to look at implications for future trends. As cross border movement is common amongst a large proportion of startup founders, the perceived attractiveness of certain locations can be pivotal towards inducing movement. To learn more, we asked: If you could begin all over again, where would you like to startup?

We also asked our startup founders to do a reality check on their preferred startup location: Founders had the choice to rate their preference based on how much they would consider moving there, rating from 1 (not likely at all) to 10 points (extremely likely). With these answers, we are able to identify the attractiveness of some of Europe’s startup hubs – from the perspective of startup founders.

Looking at the Mediterranean and CEE region, six cities from those regions make it to our top 20. Here is how they perform:

These six startup hubs outshine their regional competitors. They are attractive on the European level (especially Barcelona, Lisbon, and Milan), and importantly, are attractive to startup founders within their home regions. Italy and Hungary may experience an exodus of startup founders more generally, but regional champions Milan and Budapest retain a strong appeal. Even though the Mediterranean and CEE regions may lose talent overall, cities like Barcelona, Lisbon, Milan, Madrid, Prague, and Budapest function as beacons that are likely to attract even more startup founders in the future.