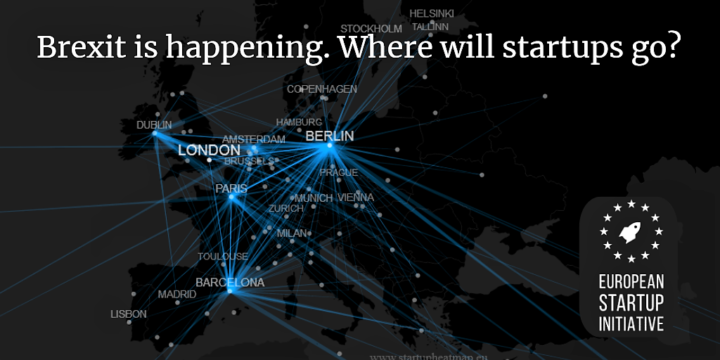 Deal or no deal, the UK will leave the EU on 29 March 2019. Who stands to benefit? We identified 5 top startup hubs that are likely to become the greatest Brexit profiteers.

Brexit and the impact on UK Startup Hubs

The United Kingdom has a very good reputation among European startup founders. While London remains Europe’s number one startup mecca – a remarkable ten British cities are “hot” on our 2017 Startup Heatmap Europe. London and Edinburgh are both found in the top 30 list of European Startup hubs, with cities like Glasgow, Belfast, Liverpool and Manchester not far behind. Altogether, the UK attracts almost a quarter of all votes in our 2017 survey among European startup hubs:

When the UK officially announced its intent to leave the European Union on 29 March 2017, it triggered a two-year negotiation period foreseen in Article 50 of the EU Treaty. The negotiations between both sides have been tense, and the eventual terms and procedures of the UK’s exit from the EU remain uncertain. No matter what, “deal or no deal”, the UK will leave the EU on 29 March 2019. Across Europe, this prospect fails to generate excitement – to put it mildly.

European startup founders are skeptical, as the Startup Heatmap Europe survey reveals. We find that European startup founders are overwhelmingly against Brexit.  When asked their opinion, 85% would have voted against Brexit. Moreover, a mere two percent of British startup entrepreneurs were found to have voted in favor of Brexit. Not surprisingly, many founders both within the UK and across Europe fear negative consequences. We find that one in three European founders say that London is now less attractive due to Brexit.

Despite its unpopularity, Brexit remains an eventuality. However, some startup hubs are positioned to gain from the UK’s loss in popularity. To learn more about how founders might respond, we asked: Which European cities are most likely benefit from Brexit?

First, we scrutinized our data and had a close look at those startups that are most likely to be affected by Brexit: UK based companies led by non-British origin founders. Once Britain leaves the EU, their uncertain legal status may lead them to reconsider the UK as their home base. Based on the preferences of this select group of startup founders, we identified the following 5 top cities that stand to win thanks to the consequences of Brexit: Dublin, Barcelona, Paris, Amsterdam, and Berlin. Together, these 5 places are likely to profit as much from Brexit as the rest of Europe combined:

Who stands to benefit from Brexit?

Let’s have a closer look at the hubs most likely to profit from Brexit:

6% of UK-based startups with non-British founders voted for Dublin as the ideal place to startup, putting the Irish capital 5th on our list of the greatest Brexit profiteers. On the European level, Dublin, stands to gain even more popularity among startup founders: it ranks 6th overall on the Startup Heatmap, defending this position in 2017.

The Irish digital economy is calculating to win over UK founders and companies that wish to remain in the EU´s marketplace. Marina Donohoe, director for UK and Northern Europe at Enterprise Ireland, sums it up: “Assuming a UK exit, Ireland will be the only English-speaking country in the EU and with advantages of talent, a well-developed ecosystem, the presence of large tech companies and leading-edge research centers. It’s a great location for startups.” Russ Shaw, founder of Global Tech Advocates, points out the precarious loss of talent that post-Brexit London is likely to endure: He expects Dublin to become an important bridge, where more and more British companies open up subsidiary offices, which will allow especially London´s startup ecosystem to stay connected to the much-desired European talent pool.

Dubliners seem to be gearing up to profit from Brexit. Niamh Bushnell, as Dublin’s startup commissioner until 2016 tasked with boosting startups, coined the rallying cry: “With Brexit comes opportunity. Let’s not waste it.”

In the past few months, Barcelona has not produced many positive headlines, due to Catalonia´s move for independence. Observers point out the conflict surrounding Catalonia´s independence is the greatest risk for Barcelona´s future as a major business and startup hub. Apparently, this may have botched Barcelona´s bid to become the new home of the European Medicines Agency, which is leaving London ahead of Brexit. Access to capital, in particular, seems to be threatened by Catalonian uncertainty.

The data from Startup Heatmap Europe, even though dating to before the Catalonian referendum, suggests that not all is bad in Barcelona. On the contrary: European startup founders rank Barcelona 4th among the greatest Brexit profiteers: Despite questions of capital and Catalonian succession, Barcelona is among the most attractive locations for startups in Europe, ranking 3rd on the Startup Heatmap. In the opinion of UK-based startups with foreign founders, Barcelona is the third most popular place to startup (sharing the rank with Paris). Among those startup founders who believe that London is less attractive after Brexit, 7.2% name Barcelona as a great place to startup. Ultimately, unless the Catalonian independence crisis prevents it, Barcelona’s positive esteem with founders makes it a top candidate to profit from Brexit.

Paris does very well on our Startup Heatmap: The French capital is among the top ten most attractive European startup hubs, ranking 4th among startup entrepreneurs across Europe. When looking more closely at our select group of UK-based non-British startup founders, we see that Paris can maintain this popularity: 7% of them vote for Paris as an attractive place to startup, which puts it on the shared third rank (together with Barcelona). In addition, 7.5% of those founders who think that London is becoming less attractive as a startup location because of Brexit name Paris as an attractive alternative. This is the second highest percentage after Berlin (see graph below).

Paris recently won the race to become the new home of the European Banking Authority, which is leaving London ahead of Brexit. While startups usually have quite different preferences as compared to major EU institutions, this move may fuel the growing fintech startup scene in Paris. Parisians spread optimism and highlight the burgeoning attractiveness of their startup ecosystem. The French government under president Emmanuel Macron is working hard to promote the narrative of French entrepreneurial success, speaking loftily of becoming a “country of unicorns”. According to what startup founders told us, Brexit might indeed make that a bit more likely.

Amsterdam has already profited from Brexit, as it has been announced as the new home of the European Medicines Agency. Bas Beekman, as director of StartupAmsterdam in charge of promoting the city´s appeal to international startups, highlights its strategic position, the wide use of the English language, and its strong ecosystem. Amsterdam may not be the loudest contender, but it is on top position to benefit from Brexit – especially as one of the best places to startup.

On our Startup Heatmap, Amsterdam is ranked 3rd (2016) and 5th (2017) among the top ten most attractive European startup hubs. Moreover, we identified Amsterdam as the leading “Challenger Hub”, attracting a relatively high share of votes from a great variety of countries. Amsterdam is popular among British startups, especially those with non-British founders: 9% of them name the Dutch city as an attractive place to startup. That is why we are placing Amsterdam on the 2nd rank of the greatest profiteers from Brexit, right after Berlin.

Berlin is the city that is most likely to profit from Brexit. It remains London’s most important competitor in terms of attractiveness for startup founders. In the 2016 edition of the Startup Heatmap, Berlin bested London to first place, while the 2017 edition sees London ahead of Berlin:

Berlin is also working hard to bring British startups to their city. A 2016 marketing stunt by the German liberal party FDP prominently called upon London’s startups: “Dear startups, keep calm and move to Berlin”. Even if this may have “sent ripples of laughter” rather than fear in London’s startup scene – these efforts highlight a strong desire to encourage companies to consider moving. Last year, Berlin’s city government sent a letter to hundreds of businesses based in London to persuade them to come to Berlin. At the time, Cornelia Yzer, then Berlin’s senator for the economy, technology and development, said, “We want to make sure that British startups and international talent feel welcome here […] Brits already love Berlin – we see that from the number of people who travel here every weekend. We will continue to receive them with open arms.”

Berlin’s politicians are certainly not alone in highlighting the city´s startup appeal. The German capital has firmly established itself in the European startup scene, with low costs, a dynamic ecosystem, high quality of living, and, most importantly, an immense supply of international, highly educated talent – and this is no secret among startups in the UK.

Ahead of Brexit, our data reveals two key findings: First, non-British founders who have moved to the United Kingdom to startup regard Berlin as the top post-Brexit destination for startups. 18% vote for Berlin as the place where they would like to go if they could start over again – that’s twice as much as for second-ranked Amsterdam (a city that, by the way, is probably not everyone´s list yet).  While this result represents attractiveness, rather than certainty, it can be regarded as a strong indicator on where the wind is blowing.

The second key finding is that among startup founders who expect London`s attractiveness to suffer due to Brexit, 1 in 6 vote for Berlin as a top destination to startup. That is by far the best performance among all other European startup hubs. Based on these findings, we have no doubt that Berlin is set to be the greatest profiteer from Brexit. The only question remaining is whether Berlin is prepared to capitalize on this appeal and encourage founders to actually make the move.

The competition for talent and startup founders, however, is no zero-sum game. Brexit or not, the UK probably remains a powerhouse in the European startup ecosystem, and the lights certainly won´t just turn off on 29 March 2019. Yet our list of the five greatest Brexit profiteers proves that Europe´s top startup hubs are eagerly positioning themselves to benefit from the changes that Brexit will undoubtedly bring.

In the end, no one city will “win this race” and become the only place to startup. Rather, and as foreseen by Atomico’s head of research Tom Wehmeier, there is a growing number of places across Europe that, by building on their various outstanding qualities, will be able to get their fair share. The likely (and welcome) result of this development will be an overall stronger European startup ecosystem.