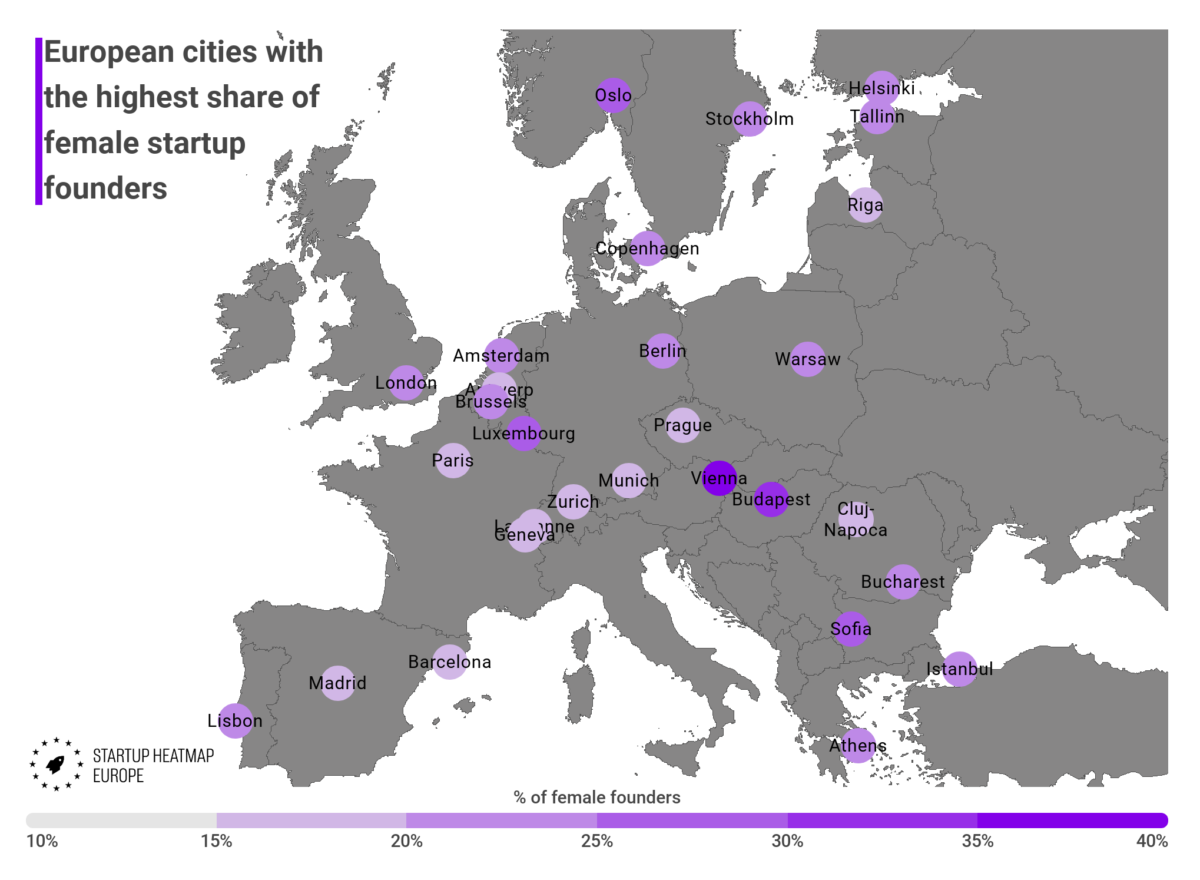 What environment allows female entrepreneurs to thrive? Women face challenges that men can’t even imagine. For them, the slope is steeper. Finding the right environment is a key to success.

Our report Women Entrepreneurs in Europe has shown that 15.5 percent of European entrepreneurs are female and that women-focused meetups have risen by 60 percent in 2019.

Get the full report for free

The organization of dedicated events is key to women’s success. The numbers of these events can give us an idea of how inclusive the tech community is.

What are our samples? We grouped cities based on the annual average of startup investments. We looked at the numbers between 2017 and 2019 and classified ecosystems by size: large, medium, and small. Large ecosystems attract significantly more investment. Unfortunately, it doesn’t always translate into funding for female startups.

Among the large ecosystems, Sweden excels. Stockholm, the capital, has 19 percent of female founders. In comparison, London and Berlin only reach 18 percent.

Only 15.5% of entrepreneurs in Europe are female

The English and German cities are the main European hubs for entrepreneurship, yet their numbers don’t excel.

Vienna is the main medium-sized ecosystem in Europe, reaching a stunning 34 percent. It gained the top pedestal thanks to initiatives such as Female Founders. As one of the first all-female startup accelerators in Europe, its goal is to connect entrepreneurs, inspire, and host funding activities.

More to the east of Europe, Budapest takes the lead for the small-sized ecosystems. The city reached 30 percent of female entrepreneurs. In 2018, Budapest hosted the “World Women’s Entrepreneurship Day”, with the goal to raise awareness and promote women-led businesses.

Zurich is the European ecosystem on the rise for female startups and might catch up with the best soon.

Although it does not have a high share of female founders, Zurich is witnessing a rising number of female-focused events. This thanks to nonprofits such as Aspire and the Women Entrepreneurs Week.

Aspire is a nonprofit organization based in Zurich. As stated in the company’s website, “We offer Programs for entrepreneurs to develop and succeed with their ideas.” Aspire organizes female-focused events and a supporting and inspiring network of women.

However, Zurich isn’t one of the leading female ecosystems in the Old Continent. Northern Europe shines, as Oslo, Copenhagen, and Stockholm (once again) pave the way to equality.

Navigating the European map south to the Mediterranean Sea, Lisbon is doing surprisingly well. We find it among the “lucky ones” of startup ecosystems with a high percentage of female entrepreneurs, despite rather weak support. In the capital of Portugal, 21 percent of startuppers are women.

Our numbers tell us that high investments don’t always result in more female startups. Women thrive in ecosystems which create opportunities, not barriers.