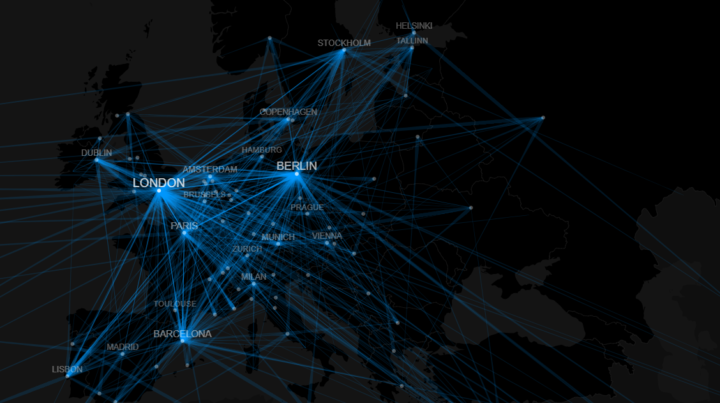 In this year’s Startup Heatmap Europe, we found considerable regional differences in how entrepreneurs evaluated their startup locations. While regional differences can provide an interesting picture about the overall satisfaction of entrepreneurs across Europe, much day to day startup activity happens in the city, or local level. We can learn even more about how these evaluations are constructed when we evaluate location satisfaction on a more local, and granular level.

How might these individual locations impact our respondent’s satisfaction levels? There are many qualities that make European startup cities unique. Here, we highlight a few relationships between our respondent’s satisfaction with their startup location and their city. These examinations aim to give us an introductory look at how these variables may correspond to one another.

The first association we can evaluate here is average overall location satisfaction with city population size. The graph below plots respondent’s evaluations according to the population size of the European city or town where their startups are located. Due to the quantity of data, not all points appear on this graph, yet we can see that satisfied entrepreneurs can be found in European cities and towns of all sizes. A line is fit to illustrate the association between the two variables in our dataset. Here, we see a generally positive trend indicating that entrepreneurs tend to express more satisfaction with their startup location the larger the city their headquarters is in.

There are a few reasons why the size of a startup’s location city can have a big impact for entrepreneurs and their companies. First, larger cities may have advantages in their access to talent, simply for the fact that more people live there. In places where talent is more numerous, hiring can be cheaper and employees can be onboarded faster. Companies also have greater options in the hiring process and can field a wider variety of candidates for the jobs they are looking to fill, ensuring a greater chance of finding just the right candidate. Larger cities are also more likely to be home to universities, other specialized companies, accelerators and incubators. Each of these institutions helps to contribute to the talent pipeline for companies looking to recruit the best. Larger cities also offer additional infrastructure and opportunities for non-local tech talent, which can work as a recruitment tool for talent from outside the surrounding area. Outside of talent concerns, living in a larger city can bring with it social benefits, of increased diversity and opportunity.

However, just because a city is more populous doesn’t necessarily mean that the type of talent that startups need can easily be found. Often, the talent required by startup entrepreneurs tends to be specialized, and can be unevenly distributed geographically. Similarly, in larger cities this scarce talent may be under high demand by other city employers, creating competition for workers and increasing costs for founders looking to hire. The solution for some founders is to work with a distributed team, but this might not be a solution for everyone. As we have seen in this year’s Startup Heatmap Europe, talent availability remains one of the most important characteristics founders consider when choosing a startup location. 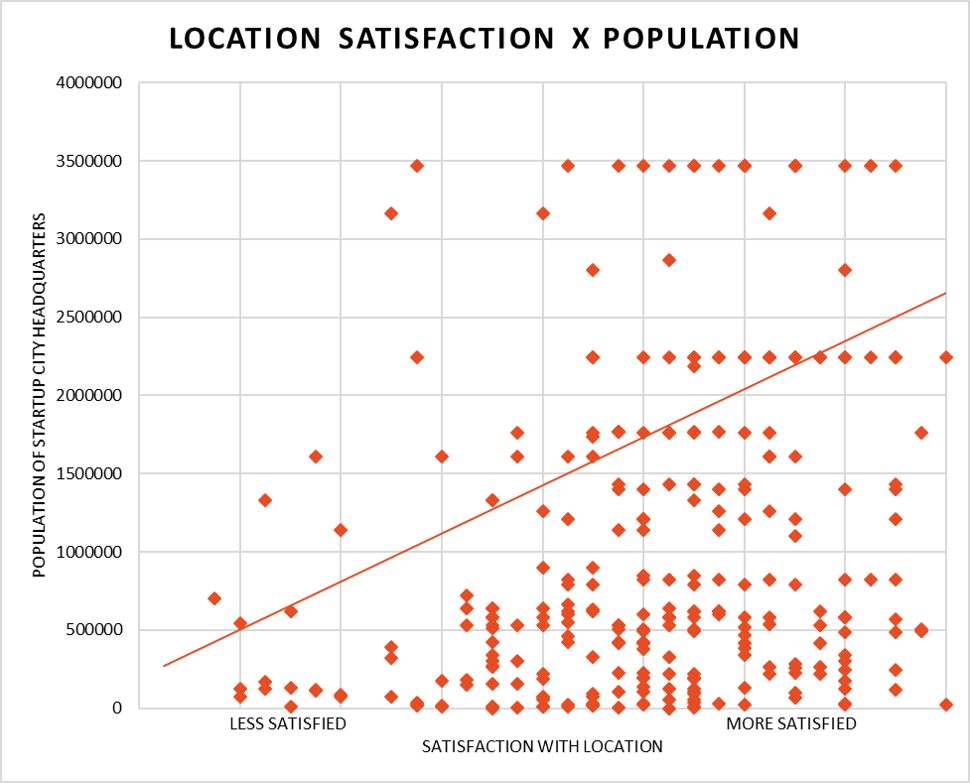 Talent considerations are just a few that can be impacted by city size. When looking at the plot above, we can see the distribution of respondents can be found clustered toward the right-hand side of the graph. It is not surprising that most respondents in our survey tend to be happy with the startup locations they have chosen for themselves. What is interesting is the amount of plot points to be found underneath the trend line. These results correspond to respondents who express satisfaction with their startup locations, despite their startup cities being smaller than we might expect, given the overall trend. The above graph indicates that European entrepreneurs can find satisfaction with a number of startup locations, no matter the size. While this graph is interesting, there is still much to learn about how population size impacts entrepreneurial satisfaction. Can we find an ideal size of a European Startup City? What can we learn from the outliers in this dataset? There is much more analysis on this to come. Look forward to these answers in a future post, where we drill down some of the specifics of how size can influence entrepreneurial satisfaction.

Alongside size, another question is if their startup location can be found in a city capital. Capital cities may offer a number of benefits for entrepreneurs, as Europe’s capital cities tend to have the greatest concentration of startup resources, whether they be talent, financing, or a business community. European capitals may be more efficient for conducting business, as many state institutions can be found there. Other characteristics can make them logistically easier, such as proximity to an international airport, and infrastructure for international employees, such as embassies and consulates. European capital cities also tend to have a concentration of cultural infrastructure, helping to support a high quality of life. It is important to keep in mind that these benefits are not always exclusive to capital cities. In addition, there are some significant costs to doing business in the capital. These cities often tend to be the most expensive, rising business costs and creating pressures on finding a location space. Finding accommodation for employees, consultants and visitors can be made more expensive by tourism taxes. Berlin, Germany’s capital, is very far east and north of much of the country’s economic engine that occurs in the country’s southwest. Other European country capitals, such as Rome, are similarly disembedded from their country’s strongest economic engines. When choosing a startup location, entrepreneurs must carefully weigh the benefits of each place alongside their individual needs. 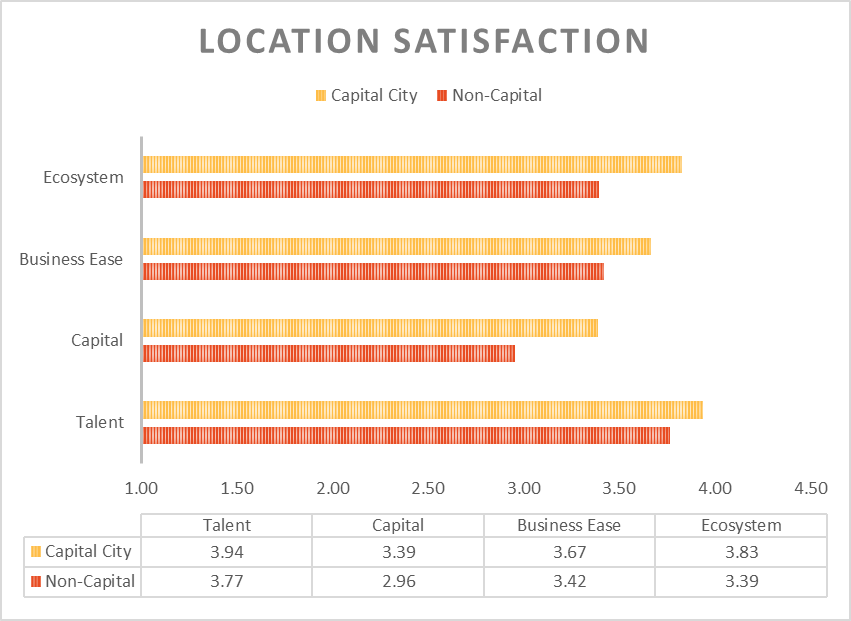 When entrepreneurs were asked in our survey about their satisfaction with different aspects of their startup locations, we find only modest differences between entrepreneurs based in a capital city, and those outside. While all values for capital city residents were on average higher, the greatest differences were found between access to capital and ecosystem effects. These might be expected, as VCs and accelerators are most frequently found in capital cities. The similarity between the values illustrates that the benefits held by capital cities are by no means exclusive, promising for cities outside our European capitals.  These results lay a compelling path for further discovery, and stay tuned for further analysis disentangling capital city effects from others such as population, regional difference and quality of life measures.

The final quality we will address in this spotlight looks at how considerations of hometown advantage may impact entrepreneur evaluations of their startup locations. Rather than a city characteristic itself, this association allows us to examine how an entrepreneur’s satisfaction with their city may change based on their association with it. The benefits of hometown entrepreneurs have garnered considerable attention in business studies. Scholars Michael Dahl of Aarhus University and Yale’s Olav Sorenson have found that entrepreneurs may prefer to remain near friends and family, where they can trade on their close local network ties and depend on their social support. Others have found that local entrepreneurs can benefit from their deeper network ties and regional-specific expertise. Alternatively, staying at home can put entrepreneurs at a disadvantage, when it comes to addressing new markets or attracting outside investment. Entrepreneurship in startups may also conflict with alternative classifications of entrepreneurship that may be more reliant on local ties and familiarity. Considerable further evidence, both in support and against hometown entrepreneurship exists, and is worthy of greater attention.

In our survey, entrepreneurs were asked where they grew up/consider ‘home’ and where their current startup location is. Here, we see little variation in the satisfaction rates between entrepreneurs starting up at home, as compared to those who are starting outside their self-identified home locations. Across all categories, the differences are minimal. Does hometown entrepreneurship matter for startup entrepreneurs? While it is possible that hometown associations do not tie a role, further analysis is necessary to examine how this might vary across industry, region and the distance between an entrepreneur’s hometown and their HQ. 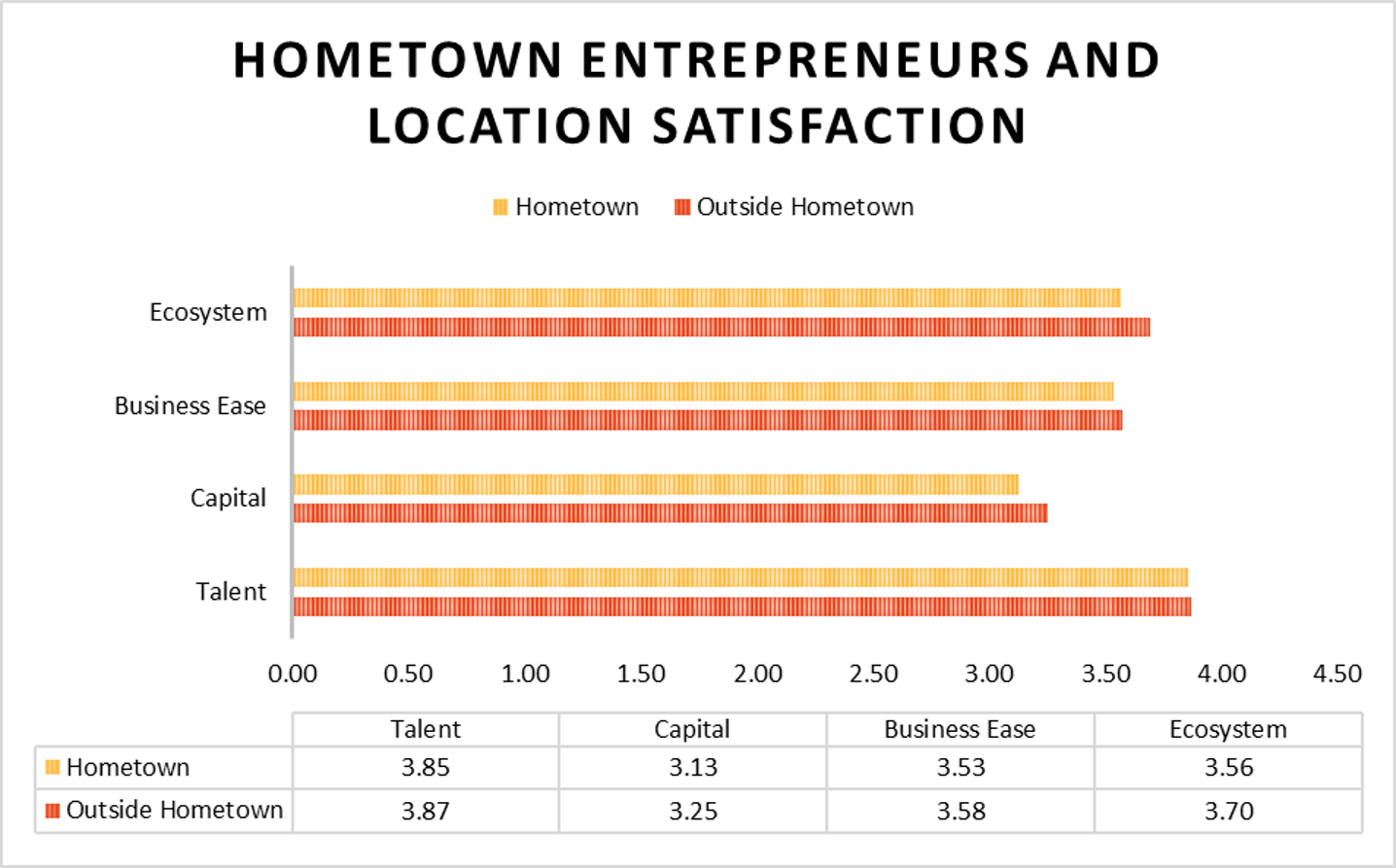 These graphs illustrate a number of interesting associations between an entrepreneur’s satisfaction with their startup location and the qualities of their cities. They each point to several compelling avenues for further research, and importantly illustrate the multifaceted qualities that may contribute to how entrepreneurs evaluate their startup locations. As with any data analysis, it is important to recognize the limitations of your data. These graphs indicate that the qualities that go into a great startup location cannot be easily collapsed into simple correlation, as each entrepreneur weighs their considerations differently. While none of these surface associations (population size, capital city, or hometown familiarity) can give us a definitive answer in isolation, it is possible to look greater inside the data to identify how these characteristics work alongside and interact with one another. It is important to put these associations in context and evaluate them with the consideration of their larger landscape. Stay tuned for deeper analysis into each of these variables, and how we can begin to identify startup locations that offer entrepreneurs the greatest opportunity for success.