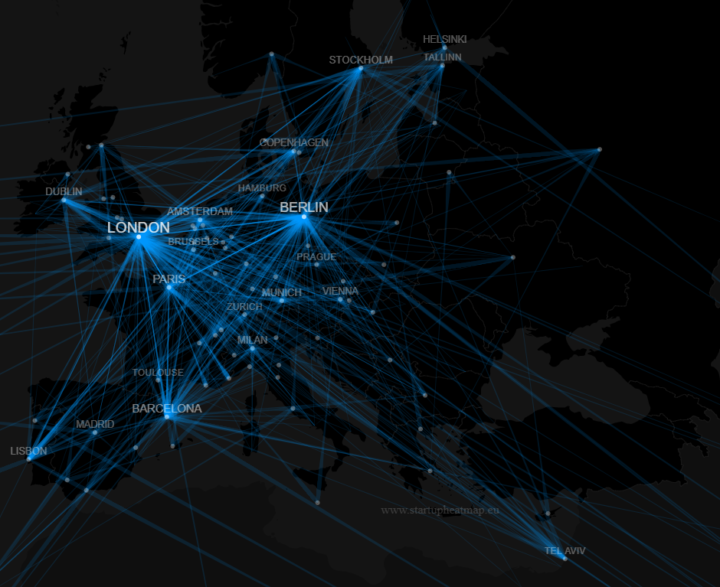 In our 2017 survey, we asked 320 startups CEOs why they decided to set up their businesses in a certain location and what are their preferred ingredients for a successful startup city. Here, I analyze their results alongside additional macroeconomic factors, to examine if they may play a role in the location choice. Is there a correlation between GDP, unemployment rate, economic freedom in a country and how attractive these locations are for startups?

In order to answer to this question, we looked at the net migration flows between countries, the difference between the amount of startups that moved to a country from abroad and those that have left. In some countries such as the UK, Finland, Germany, Portugal, and Denmark, this figure is positive: the number of startups that have decided to move there is greater than those that have left. In other countries, including, Belgium, the Netherlands and Sweden the two flows balance one another, so we do not observe a net surplus or a deficit. Alternatively, in our survey we find France, Italy and Spain experiencing negative net flows. In these cases, more startups have left these countries than have been replenished.

In the graph below, we visualize the correlation between the net flows and two important economic drivers: economic freedom and GDP per capita. The first measure, economic freedom, is comprised of an index based on 12 quantitative and qualitative factors grouped in four broad categories: rule of law, government size, regulatory efficiency and open markets (click here for more information on this index). The GDP data refer to 2016 (Eurostat). 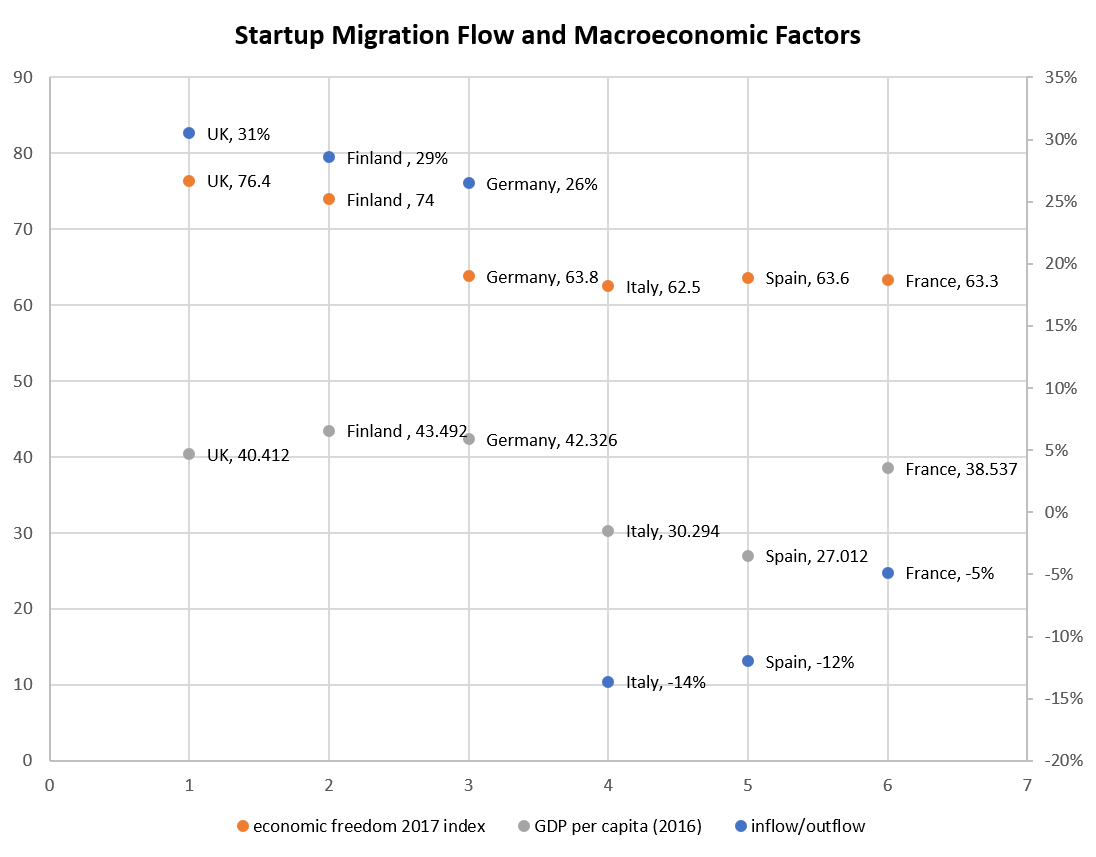 As we can observe, there is a correlation between the attractiveness of these countries for startups and the economic freedom index and a weaker, but still consistent, correlation with GDP per capita. For example the UK, that has experienced the highest surplus with a 31% net inflow, ranks also first in Economic Freedom (76.4) and it has one of the highest GDP per capita (40,412€). Alternatively, Italy, that in 2017 has witnessed the lowest negative flow among the countries selected (-14%), has also the lowest economic freedom score (62.5) and one of the lowest GDP per capita (30,294€), only higher than Spain. While these correlations have limited explanatory power, they indicate a relationship between the country’s economic strength and openness and its attraction for startups.

Other macroeconomic factors analyzed were the 2017 unemployment rate and the GDP growth rate calculated over the time span 2006 — 2016 (source: Eurostat). The net flows and these variables experience a weaker correlation, in comparison to the previous measures tested. For example, Finland, has a quite high unemployment rate of 8.8% (higher than the EU-28 average of 7.7%) and a low GDP growth of 0.1, even lower than the 0.3 of Spain. However, it has been able to sustain a 29% inflow of startups, second only to the UK. These relationships indicate that multiple economic factors may contribute towards how founders evaluate opportunities to startup around Europe.

Does this mean that European CEOs look at the economic freedom index or GDP per capita data before choosing their startup location? Not likely, however these correlations present an interesting finding and suggest avenues for further investigation.