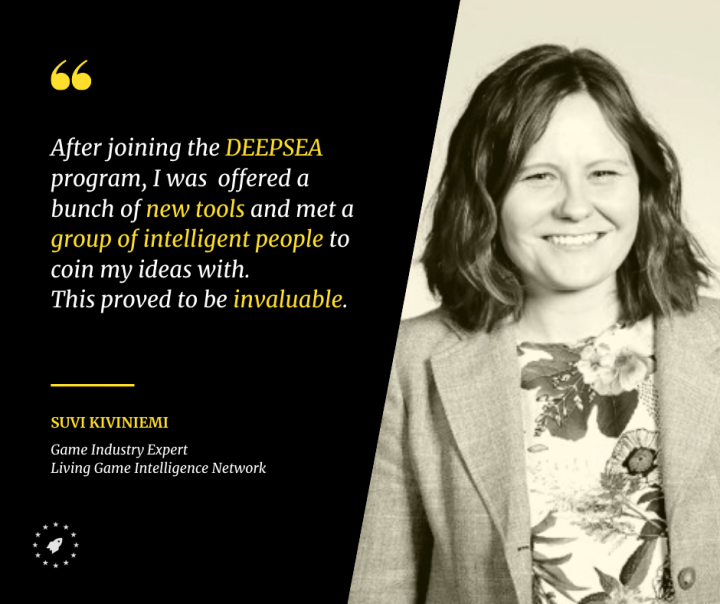 Our alumni are spread all across the globe making impacts on their startup ecosystems. To acknowledge all of our wonderful alumni and the accomplishments in their career, we spotlight and host them here. Flip through our incredible alumni and learn more about how the DEEPSEA has impacted their career journeys.

Meet our alumna, Suvi Kiviniemi from Living Game Intelligence Network who shares her story of bringing Finland’s Gaming Industry to a new level.

“Back in 2019, Helsinki´s gaming industry was going through difficult times with lack of main stakeholders’ support. The gaming startup scene was in need of a new bootstrapped support network. After joining the DEEPSEA program, I had a couple of days to concentrate on planning our ecosystem on a higher level. I was also offered a bunch of new tools, and a group of intelligent people to coin my ideas with. This proved to be invaluable. I sketched a plan for a bootstrapped support network for young game companies, and soon realized it would also work to strengthen the open culture we already had in the industry. When I returned home, I kept developing my idea, and integrated it into a project we had running”.

Early in 2020, Suvi together with her team has launched the Living Game Intelligence Network, LGIN .“It’s kind of a modular way to approach startup support – a lightweight, flexible, industry specific mentoring network that could be added on top of a more generic incubation or acceleration process, but also works as a stand-alone. It enables seniors to support young entrepreneurs, which in turn strengthens the culture of sharing and the matrix of peer support.”

The network was immediately welcomed as an important part of the ecosystem both by start-ups and industry seniors who were excited to volunteer as mentors. Discussions on developing it further and possibly copying it to other industries in the area are ongoing.

Don’t miss to join our first all virtual DEEP Ecosystem Conference that will bring together over 100 ecosystem leaders from across the globe to tackle current challengess as well as our tailor-made DEEP Startup Ecosystem Accelerator (DEEPSEA) program to develop your innovative projects. Find out more here: https://www.startupheatmap.eu/deepsea-programs/