II) What is the Impact of “Ecosystems”?

When we speak of “ecosystems” we take a particular vanguard on analyzing startup success. The ecosystem is the cumulation of resources, networks, opportunities, and institutional settings that make the growth of a company possible.

Today, more than yesterday, local conditions play a crucial role in supporting entrepreneurial success and therefore the growth and development of a region. In comparison to other world regions, Europe continues to lag behind in the total number of startup investments by the factor of 2x versus Asia and a factor of more than 3x versus the US and Canada.

The current shock of the COVID-19 pandemic is further affecting the social and economic environment and puts many European startup ecosystems under pressure and uncertainty is dominating the general business environment.

The performance picture is regionally diverging with a strong leadership group of only three hubs, that capture the bulk of investments: London, Paris and Berlin share >50% of all investments in Europe among themselves (based on the average annual investments raised in the past three years in 111 cities across Europe). However, we do see a number of startup hubs increasing their annual investments raised. There is a total of 17 hubs, who doubled their 3 year average based on a comparison of 2015-2017 and 2018-2020.

The diverging performance clearly shows that locally embedded ecosystems are the driving factor behind startup success. Investment growth for startups is dependent mainly on location and connection to a functioning ecosystem. Rather than the place itself, the existence of a healthy ecosystem that empowers startups to succeed is crucial. From previous research we know that entrepreneurial talent aggregates in locations where support conditions are favorable, and capital follows suite. The key lever for cities to compete in this race is to support the build-up of world-class ecosystems comprised of entrepreneurial culture, talent availability and diversity, startup-friendly policies, international openness as well as the existence of vibrant communities. Capital is a result of this, not the source. It is therefore questionable if creating regional investment funds by the government as the main policy tool is advisable.

Growth of Investments per City

Table 12: Largest Percentage Increases in Total Investments Raised per City Source: Own Calculations based on Dealroom.co

Instead of taking the number of unicorns created in an ecosystem, we suggest to look at the number of cities in Europe where startups managed to raise >1bn € total investment per year. There is only 4 hubs, who manage to raise this amount 3 years in a row (London, Berlin, Paris, Tel Aviv). Stockholm managed at least the last two years. Amsterdam and Munich in one since 2018.

Table 13: Cities where startups raised cumulatively more than 1bn € per year over time
Source: Own recordings of Dealroom.co data year by year

In such a context, it becomes crucial to explore and understand place idiosyncrasies to identify opportunities, weaknesses and risks influencing the functioning of each ecosystem. This allows policy-makers and ecosystem builders to devise strategies to reroute the ecosystems onto a sustainable development path.

A first step to understand how startup ecosystems in Europe are performing is to analyze the investment growth – it serves as the dependent variable in our analysis if you like. Investments offer insights on the trust investors have in the future performance of regional or vertical ecosystems. It allows us to understand the big picture of general developments in Europe as well as to look into the regional and vertical heterogeneity.

The EU’s Covid Response boosted a 14% growth in investments

By exploiting both Dealroom and Crunchbase databases, we have investigated over time the total amount of investments per year, excluding non-tech startups and grant financing. From 2015 to 2020, we identify a steady and strong increase of total investments of on average 20% year over year. In 2020 funding increased only by 4% – which marks a dramatic stop to this growth path.

There is however, an important caveat: If we include government grants into the picture, we see an increase of 14% in 2020 spurred by a 5.9bn € injection of grants of governments, mostly as COVID-19 response.

Graph 6: VC Funding and Grants for Startups in Europe
Source: Own calculation based on data from Dealroom.co

It is interesting to see, that the percentage of international participation in European rounds is further increasing, even at an accelerated pace.

Table 15: International Investments from outside Europe over time
Source: Dealroom.co

In 2020 one fourth of all rounds in Europe had non-European investors participating. This percentage was 13% five years ago. In terms of total funding, these rounds make up 61% of all capital invested in Europe in 2020.

Graph 7: Share of rounds with non-European Investors over time
Source: Own calculations based on data from Dealroom.co

Seed Investments shrink by 8% for 3 years in a row

Despite the current positive trends of investments backed by international investors as well as European governments, there is a worrying trend to be observed. Seed investments as measured by rounds between 500k – 2mn € are in decline for 3 years in a row with an average of -8% per year. While in 2017, Europe saw 1,706 seed rounds, in 2020 the number was down to 1,325.

Seed investments are a particularly important metric as they indicate the potential of future larger VC rounds taking place. Simply said, if we do not see more seed rounds today, it is unlikely that we will see more mega rounds >100mn € in the coming 3-4 years. Thus, if this trend continues, total investments in Europe will be declining in the coming years. This trend might not be visible though, as already successful startups like Klarna or N26 keep raising larger rounds than before affecting the overall numbers. It is advisable to correct total investment sums by not taking into account startups older than a certain age or raising above a certain amount.

Table 16: Number of seed rounds (500k – 2mn €) with and without international participation
Source: Own Calculation based on data from Dealroom.co

Graph 8: Nr. of seed rounds (500k – 2mn €) per year in Europe
Source: Own Calculation based on data from Dealroom.co

48% of startup hubs are in decline

To get an idea of the regional differences we looked at 62 cities where data on seed investments was available for every year since 2015. 29 of these had a negative growth rate (48%), while 14 were able to double their seed investments over time (23%). The highest growth rates were recorded for Krakow, Utrecht and The Hague. The total amounts are not particularly high, but since we look at three year averages and only seed investments, the data is showing a robust growth.

Table 17: Highest growth rates in seed investments (500k – 2mn €) based on 3-year averages
Source: Own calculations based on dealroom.co

To get a more complete overview we list here the 10 startup hubs in Europe with the highest seed investment amounts based on a 3-year average from 2018-2020 as well as their growth rate compared to the 3-year average from 2015-2017. While the ranking of the seed investment sums confirms the usual picture, the growth rates show significant differences. Particularly interesting are Zurich (+96%) and Munich (+85%).

Table 18: Cities with highest seed investments (500k – 2mn €) based on 3-year averages
Source: Own calculations based on dealroom.co

Figures on seed investments in Europe present some strong and some weak points confirming the important role of regional ecosystems. In addition, we are investigating what role vertical orientations play.

There is a basic challenge in measuring “verticals” or tech trends by investments, as the terms used by practitioners change frequently and databases have a hard time to find common definitions and re-tag their recorded investments accordingly. For example, what is considered an Artificial Intelligence startup? Where is the cut-off line between Biotech and Health Tech? What do you mean by CleanTech? It would be easier to talk about “industries”, but the classical definitions of classes like Software, Automotive or Manufacturing feel odd when analyzing the disruptive trends promoted by startup companies. Therefore we must find ways to categorize investments “on the fly”.

Crunchbase offers a very transparent system of tags, that allows to re-combine the tags used in their database on your own. Thus we tried to include only those tags that match our definitions of the verticals as we see them used by practitioners.

Table 19: Seed Investments (500k – 2mn €) per vertical in Europe over time
Source: Own calculation based on Crunchbase data

AI & Data is the dominant investment sector in Europe

By using these definitions we can start to understand the different levels of importance played by the various verticals at the core of the startup ecosystem. We decided to investigate investments in each vertical by taking into account the average of seed investments (500k – 2mn €) in two different timespans comprising three years each: t1 considering 2015-2017 and t2 referring to 2018-2020.

It is not surprising to see the dominant positions played by FinTech, Health, AI&Data and Mobile Internet services. The latter have experienced however a strong decline, which indicates that this established technology is reaching maturity and leaves the “innovation space” where venture capital is the main fuel for growth.

In fact it gives an interesting glimpse into the S-shaped growth of innovation and reminds us of the long cycles we are observing. Fintech (+20%) and AI&Data (+14%) for example are innovation fields still in the growth phase and we do not yet know when they will have reached their zenith. Both AI&Data and FinTech increase over the two periods moving respectively to the first and third position in the ranking. Despite the expectation after the frenzy on health solutions in 2020, Health has not yet risen dramatically, and the growth rate over the past 6 years remains moderate at 12%. Interestingly AgriTech has the highest growth rate of 36%, but also one of the lowest total amount of seed investments. It remains to be seen if this is going to be a major tech trend for Europe.

Overall, we see a rather stable picture on verticals with slow but steady changes. It is therefore clear that new verticals in the startup world emerge over the course of 5-6 years and we do not see sudden changes from one year to the other. 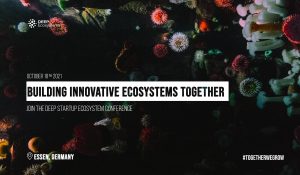